You are here: Home / About Us / The Beloved Disciple

The History of the Beloved Disciple

As part of our Centennial celebration in 2010, Holy Family commissioned a life size bronze statue to fill an empty niche above the Nativity stained glass window on the south side of the Church. The sculpture, which depicts a figure, neither male nor female, is seated in a reflective posture. This figure symbolizes “the Beloved Disciple.” 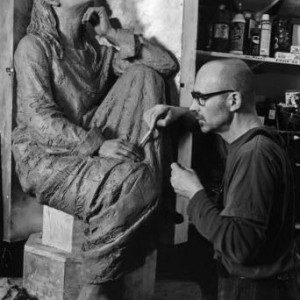 So just who is the Beloved Disciple mentioned in the Gospel of John? Traditionally the Beloved Disciple was identified as John the Evangelist who is commonly believed to be the author of the fourth gospel.  Although mentioned four times in John’s Gospel, the reference to “the one Jesus loved” does not appear in the other gospels.

For centuries a multitude of biblical scholars have continued to debate the identity of “the one whom Jesus loved”.  Theories about the reference to the Beloved Disciple usually include an attempt to explain why this anonymizing idiom is used; why not just state an identity? Many early disciples have been suggested as the hero of the Johannine community.   For example, perhaps Lazarus is the beloved for Jesus was moved when he learned of his death.  Others suggest the Woman at the Well for she is the first to evangelize the Samaritans.  What about the Jewish leader Nicodemus who visited Jesus in secret?  Another school of thought is that Mary of Magadala is the beloved for she is mentioned in two of the stories when the Beloved Disciple is mentioned.  Perhaps redactors changed her role so a woman would not have such a prominent position.  Could the ‘Beloved Disciple’ be the one often called Jesus’ brother, James?  It would make sense that Jesus would hold James responsible for the care of his mother, Mary.

Years ago, Msgr. Connolly, who served as Pastor for 25 years and is now our Pastor Emeritus, attended a seminar with Fr. Raymond Brown, the illustrious Johannine scholar. He approached Fr. Brown and asked who this Beloved Disciple might be.  Fr. Brown explained it this way: “The Beloved Disciple, the hero of the community, is singled out as the particular object of Jesus’ love.  The Beloved Disciple is not one person but an image of all disciples. Nicodemus who comes to the Lord by night seeking meaning in his life, he is the Beloved Disciple. The Samaritan woman at the well, the woman taken in adultery…forgiven, healed and renewed by Jesus, these too are the Beloved Disciple. In fact all those who follow Jesus seeking discipleship are in fact beloved. “

Monsignor Connolly was deeply inspired by Fr. Brown’s suggestion that “the one whom Jesus loved” could be any of us.  He often used the theme – that each of us is completely ‘beloved’ – in his homilies, and in one on one spiritual direction.  This understanding became embedded in the Holy Family faith tradition.  It was natural then that the Centennial Committee would select an artistic rendering of the Beloved Disciple, so prominent in the welcoming and inclusive ecclesiology of the Holy Family community, as the ideal subject for a statue to place in the niche.

This image, created to celebrate one hundred years in the life of Holy Family, will be there to remind generations into the future that each and every one – whoever they are – is a Beloved Disciple.

As a community, we seek to find ways to live out our discipleship through grace, gratitude and generosity. When viewed as a trio of words, they capture the essence of a Christian lifestyle:

Grace—spending time in prayer, personally and communally, allowing the grace of God to work through us and transform us.
Gratitude—placing our gifts and talents at God’s service in and through the Church, as a grateful response to all that God has given us.
Generosity—sharing our material and financial resources in charity out of compassion and as a faith response to the needs of others.

Theological Reflection On Our Mission Statement

Tomasz, a former Holy Family parishioner who now lives in Oregon, was our choice to create a statue of the Beloved Disciple.  A sculptor and painter, Tomasz earned his Masters of Fine Art and Ph.D. from the Academy of Fine Arts in Gdansk, Poland.  His work is on display in private collections and museums internationally, most notably in the Vatican.

In November 2009, Tomasz created a mock up of the sculpture which depicted a figure which was neither male nor female, and which was seated in a reflective posture.   The parish leadership and Holy Family staff were able to comment on the statue and to make some suggestions for modification.

In May, 2010 the statue was taken to a foundry near Portland, Oregon where the casting process took place over several months.  The casting of the statue itself is a deeply theological statement.  Using the lost-wax process, a mold of the statue was created, broken into pieces and then filled with molten wax. The outer mold is removed and the wax mold is reassembled and cast in bronze to create the finished statue.  Out of brokenness comes rebirth!

In November of 2010 it was blessed and installed in the niche in the south side of the Church building.

The Beloved Disciple Prayer
Creator God and source of all life,
we praise you and
we thank you for your great power
and your tender faithful love.

Everything we have and everything we are
is your gift to us.
We know we are loved by you beyond all imagining.

Indeed, your love for us is so great
that you gave us the gift of your Son,
Jesus Christ.

Fill our minds with his truth
and our hearts with his love
so that we may be bonded together
as Beloved Disciples
into a community of faith,
a parish family, a caring people.

We commit ourselves
to be loving stewards
of the gifts entrusted to us,
to live with grace, gratitude and generosity
as an outward sign of the treasure
we hold in Jesus.
Amen.