A Talk by Professor William Dyrness

When we flip a light switch today, few of us think of the sudden light as an expression of God’s presence and goodness. However, in the medieval period, when light was precious (and expensive!), artists like Dante often saw light in theological terms. Professor Bill Dyrness will focus on the way Dante employed light as a sign of God’s love, and how, with Beatrice’s instruction, Dante Pilgrim was taught to see the way to a final (beatific) vision of God. In addition to examining and listening to parts of the Paradiso, we will see how visual art before and after Dante developed this connection between light and God’s loving presence.
A reading of cantos 1 and 2 of Paradiso before the presentation is recommended.

The Divine Comedy by Dante Alighieri, written between 1310 and 1321, is one of the most artistic and poetic creations of Early Renaissance Italy. It is a compendium of medieval history, science, classical philosophy and most importantly, Christian faith and worship. The work is divided into three sections or canticles; Inferno, Purgatorio and the least known, Paradiso.

William Dyrness Senior Professor of Theology and Culture, Fuller Theological Seminary, is the author most recently of The Origin of Protestant Aesthetics in Early Modern Europe (2019), and The Facts on the Ground: A Wisdom Theology of Culture (in press). 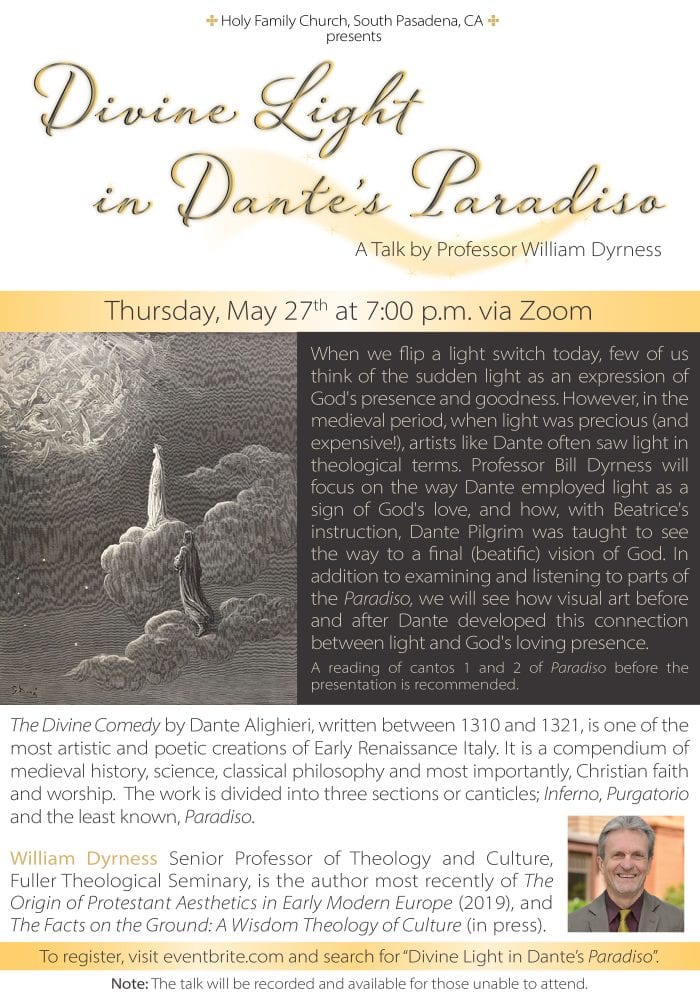