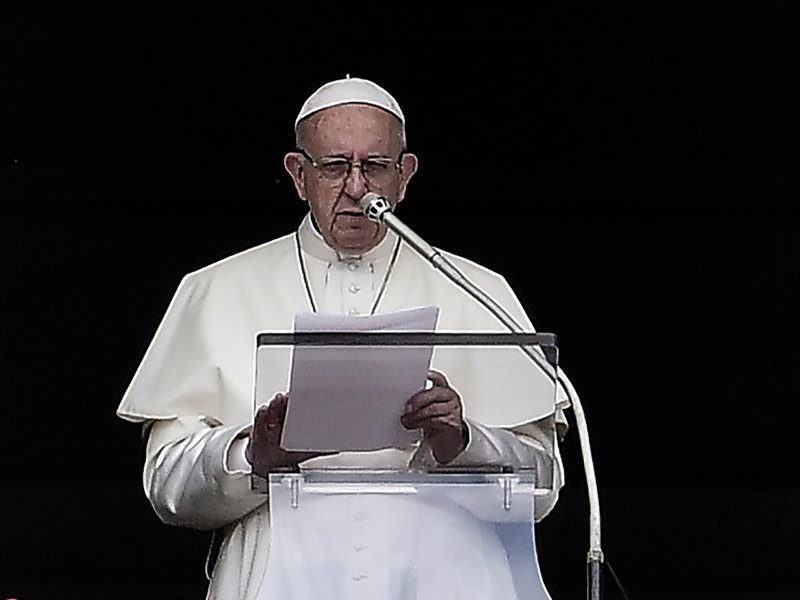 In a forceful letter just ahead of his Aug. 25-26 trip to Ireland, and just after a blistering Pennsylvania Grand Jury report on sex abuse crimes and cover-ups in six dioceses, Pope Francis wrote Monday “no effort must be spared to create a culture able to prevent such situations from happening, but also to prevent the possibility of their being covered up and perpetuated.”

Referring to the Grand Jury report, the pontiff wrote, “The heart-wrenching pain of these victims, which cries out to heaven, was long ignored, kept quiet or silenced.  But their outcry was more powerful than all the measures meant to silence it, or [which] sought even to resolve it by decisions that increased its gravity by falling into complicity.”

The pope’s words came in a “Letter to the People of God,” released by the Vatican Press Office in seven languages, suggesting the Vatican wants it to have the widest possible distribution. The full text runs to just under 2,000 words.
On the subject of accountability not just for the crime but the cover-up, an issue that figured prominently in the Pennsylvania report, Francis vowed that such measures have to be part of any solution.

“I am conscious of the effort and work being carried out in various parts of the world to come up with the necessary means to ensure the safety and protection of the integrity of children and of vulnerable adults, as well as implementing zero tolerance and ways of making all those who perpetrate or cover up these crimes accountable,” the pope wrote.

“We have delayed in applying these actions and sanctions that are so necessary, yet I am confident that they will help to guarantee a greater culture of care in the present and future,” he said.

Francis did not, however, offer any new specifics as to what those accountability measures might be.

In recent weeks, several cardinals around the world have come under fire for alleged mishandling of abuse complains. Wuerl drew fire on those grounds in the Pennsylvania report related to three cases during his time as the bishop of Pittsburgh from 1998 to 2006, and in Chile, both Cardinals Ricardo Ezzati, the current Archbishop of Santigo, and Cardinal Francisco Errázuriz, the previous archbishop, have faced criticism and demands for their resignations over their roles in at least two high-profile abuse cases.

Strikingly, Pope Francis never uses the word “bishop” in his letter, although the role of some members of the hierarchy in exacerbating the abuse crisis through inaction or outright cover-up has been a central bone of contention for some time.
It’s a hole that Vatican spokesman Greg Burke attempted to fill in audio sound-bites released to media outlets on the letter.

“Pope Francis says that greater accountability is needed, not only for those who committed these crimes but those who covered them up, which in many cases means bishops,” Burke said.

“This is about Ireland, it’s about the United States, and this is about Chile but not only,” he said.  “Pope Francis has written to the People of God, and that means everyone.”

In the letter, Francis emphasizes the deep scars left behind by sexual abuse.
“I acknowledge once more the suffering endured by many minors due to sexual abuse, the abuse of power and the abuse of conscience perpetrated by a significant number of clerics and consecrated persons,” he wrote.

“These are crimes that inflict deep wounds of pain and powerlessness, primarily among the victims, but also in their family members and in the larger community of believers and nonbelievers alike,” the pope said.

“Looking back to the past, no effort to beg pardon and to seek to repair the harm done will ever be sufficient,” Francis wrote.

“With shame and repentance, we acknowledge as an ecclesial community that we were not where we should have been, that we did not act in a timely manner, realizing the magnitude and the gravity of the damage done to so many lives,” he wrote.

“We showed no care for the little ones; we abandoned them,” the pope said.
Francis identified clericalism as a central culprit in the abuse scandals, “Clericalism, whether fostered by priests themselves or by lay persons, leads to an excision in the ecclesial body that supports and helps to perpetuate many of the evils that we are condemning today,” he wrote.

“To say ‘no’ to abuse is to say an emphatic ‘no’ to all forms of clericalism,” he said.
The pontiff called for broader and deeper lay involvement as an important part of recovery from the crisis.

“It is impossible to think of a conversion of our activity as a Church that does not include the active participation of all the members of God’s People,” he said.
Francis arrives in Ireland next Saturday, a country profoundly rocked by abuse scandals in 2009/10 and where it continues to be a dominant topic of public interest. He’s expected to meet abuse survivors in the country and also to address the issue in his public remarks.

On Sunday, Archbishop Diarmuid Martin of Dublin cautioned that it will be “not enough just to say sorry.”

Martin argued that the Pontifical Commission for the Protection of Minors led by Cardinal Sean O’Malley of Boston is not sufficiently “robust” and “not getting its teeth into where it should be,” suggesting that Francis required a different team.
Meanwhile, the US-based watchdog group BishopAccountability.org released a list of more than 70 Irish clergy convicted of sexual abuse on Monday, after redacting around 20 names out of concerns over stringent European privacy laws.

“Many have told us that this list is a risky thing,” a statement from the group said. “The Christian Brothers notoriously took legal action to prevent the naming of names in the Ryan Report. The names of accused priests usually appear in the Irish press only if the priest is convicted in a criminal court. Elsewhere in Europe, even convicted child molesters enjoy anonymity.”

“We hope that this Irish database will encourage an open debate about how societies balance an accused person’s privacy rights against a child’s right to be safe and the public’s right to know,” the group said.