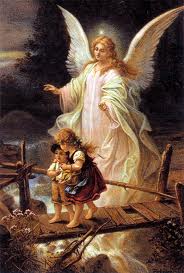 Today is the The Feast of the Holy Guardian Angels.  The solemnity of September 29 celebrates the praises of all the nine glorious choirs, yet the piety of the faithful, in the latter ages, desired to have a special day consecrated to the Guardian Angels. Several churches having taken the initiative, and kept the Feast under various rites and on different days, Paul V (I (1608) authorized its celebration ad libitum. Clement X (1670) established it by precept as a Feast of double rite  on October 2.

It is of faith, on the testimony of the Scriptures and of unanimous Tradition, that God commits to His Angels the guardianship of men, who are called to contemplate Him together with these blessed spirits in their common fatherland. Catholic theology teaches that this protection is extended to every member of the human race, without any distinction of just and sinners, infidels and Baptized. To ward off dangers; to uphold man in his struggle against the demons; to awaken in him holy thoughts; to prevent him from sinning, and even, at times, to chastise him; to pray for him, and present his prayers to God: such is the office of the Guardian Angel. So special is his mission, that one Angel does not undertake the guardianship of several persons simultaneously; so diligent is his care, that he follows his ward from the first day to the last of his mortal existence, receiving the soul as it quits this life, and bearing it from the feet of the sovereign Judge to the place it has merited in Heaven, or to its temporary sojourn in the place of expiation and purification.

It is from the lowest of the nine choirs, the nearest to ourselves, that the Guardian Angels are for the most part selected. God reserves to the Seraphim, Cherubim, and Thrones the honour of following His Own immediate court. The Dominations, from the steps of His throne, preside over the government of the universe; the Virtues watch over the course of nature’s laws, the preservation of species, and the movements of the heavens; the Powers hold the spirits of wickedness in subjection. The human race in its entirety, as also its great social bodies, the nations and the churches, are confided to the Principalities; while the Archangels, who preside over smaller communities, seem also to have the office of transmitting to the Angels the commands of God, together with the love and light which come down even to us from the first and highest hierarchy. O the depths of the wisdom of God! Thus, then, the admirable distribution of offices among the choirs of heavenly spirits terminates in the function committed to the lowest rank, the guardianship of man, for whom the universe subsists. Such is the teaching . . . the Apostle, in like manner, says: ‘Are they not all ministering spirits, sent to minister for them, who shall receive the inheritance of salvation?’ [Heb. i. 14]

But God, magnificent as He is towards the whole human race, honours in a special manner the princes of His people, those who are most favoured by His the work of salvation, the Guardian Angel has no fear of being left alone at his post; at his request, and at God’s command, the troops of his blessed companions, who fill Heavn and earth, are ever ready to lend him their aide These noble spirits, acting under the eye of God Whose love they desire to second by all possible means, have secret alliances between them, which sometimes induce between their clients, even on earth, unions the mystery whereof will be revealed in the light of eternity.

‘How profound a mystery,’ says Origen, ‘is the apportioning of souls to the Angels destined for their guardians! It is a Divine secret, part of the universal economy centered in the Man-God. Nor is it without ineffable order that the ministries of earth, the many departments of nature, are allotted to the heavenly Virtues; fountains and rivers, winds and forests, plants, living creatures of land and sea, whose various functions harmonize together by the Angels directing them all to a common end.’  [in Josue, Hom. xxiii]

But let us return to our own specially-deputed Angel, and meditate on this other testimony: ‘The noble Guardian of each one of us sleeps not, nor can he be deceived. Close thy door, and make the darkness of night; but remember, thou art never alone; he has no need of daylight in order to see thy actions.’ And who is it that speaks thus? Not a father of the Church, but a pagan, the slave philosopher Epictetus. [Ap. Arrian. Diss. 1. 14]

In conclusion, let us listen to the Abbot of Clairvaux, who here gives free rein to his eloquence: ‘In every place show respect to thy Angel. Let gratitude for his benefits incite thee to honour his greatness. Love this thy future coheir, the Guardian appointed for thee by the Father during thy childhood. For though we are sons of God, we are as yet but children, and long and dangerous is our journey. But God hath given His Angels charge over thee, to keep thee in all thy ways. In their hands they shall bear thee up, lest thou dash thy foot against a stone. Thou shalt walk upon the asp and the basilisk; and thou shalt trample under foot the lion and the dragon. [Psalm xc. 11-13] Yes; where the road is smooth enough for a child, they will content themselves with guiding thee, and sustaining thy footsteps, as one does for children. But if trials threaten to surpass thy strength, they will bear thee up in their hands. Oh those hands of Angels! Thanks to them, what fearful straits we have passed through, as it were without thinking, and with no other impression left upon us, than that of a nightmare suddenly dispelled!’ [in Psalm. xc. Sermon xii]

Adapted from THE LITURGICAL YEAR, Vol. XIV, by Dom Gueranger.