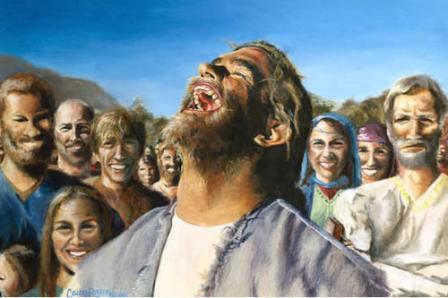 Fr. James Martin, SJ has a new book out entitled, Between Heaven and Mirth:  Why Joy, Humor and Laughter Are at the Heart of the Spiritual Life (soon to be, if not already, available  at the Holy Family bookstore).   Fr. Martin, SJ,  who you may know from his many appearances on the Stephen Colbert show, says in his book that if we are truly filled with the Holy Spirit then we should be joy-filled- as that is one of the fruits of the Spirit (Galatians 5:22-23).  In other words, being a good Christian implies being light- hearted (not necessarily happy – but not dour, we want people to want what we have, not run from it).

Laughing feels good, it just does and it has actually been shown to keep us healthy.  People who make us laugh are people who we want to be around (think of the many physically unattractive comics with gorgeous spouses).  And people wanted to be around Jesus so I’m convinced that he must have  a good sense of humor.  We know God the Creator  has a sense of humor – just look around- at yourself, at your friends and family, at penguins, pugs, pomegranates, parrots and bristlecone pines.  We are made in His image after all,  and there’s no reason to think the other persons in the Trinity are humorless.   My guess is that Jesus and His apostles spent a lot of time exchanging quips and laughing, after all many of our best comics are Jewish males!  If nothing else, humor helps us deal with pain and disappointment.

In the spirit of Fr. James Marin, SJ – I’ll end with a Jesuit joke (stolen from http://catholic-resources.org/JesuitJokes.htm):

A Franciscan and a Dominican were debating about whose order was the greater. After months of arguing, they decided to ask for an answer from God when they died. Years later, they met in heaven and decided to go to the throne of God to resolve their old disagreement. God seemed a bit puzzled about the question and told them he would reply in writing a few days later. After much deliberation, God sent the following letter:

My beloved children,
Please stop bickering about such trivial matters. Both of your orders are equally great and good in my eyes.
Sincerely yours,

So- do you think Jesus has a sense of humor?