One of the items we covered today was our experiences from the Religious Education Congress. What follows is a summary of Youth Day and some of the sessions we attended. 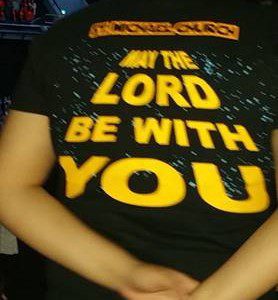 There were over 15,000 that attended Youth Day 2016. Candy & Jay Krueger assisted again this year. This was their third day helping out with Youth Day and their second year in the arena.

The excitement those who attended filled both the arena and their souls as well. During a meditation song after communion, many waved their cell phones with the light on (This has re-placed what some of use to do at concerts with lighters). This year Archbishop Gomez kept his promise by getting a new cell phone so he could turn the light on as well and join along with the rest of the arena. 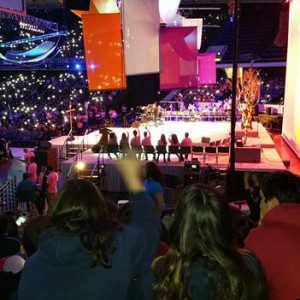 The Liturgy that was attended was Evening Prayer. Since we pray morning and evening prayer daily we were interested to see how it would be prayed at Congress. The majority of the prayer was either sung of chanted. The psalms and Magnificat were not the actual wording from the LOH, rather is was a song based and at the end of each song, the Glory Be would be chanted.

As was said, most was either sung or chanted. The exceptions were the readings, prayers of the faithful, any prayer associated with a psalm and the homily. We are not sure if everything, excluding the homily, was either chanted or sung would have worked. If this was done, it would appear to work if only the initial hymn were sung and then the remaining aspects were in chant.

It was a small service of approximately 75 with worship aids provided with the room decorated with Lenten banners. It is suspected that the small number was due to the room change at the last minute.

Praying evening prayer in community is always uplifting and this was no exception.

Fr. Richard Fragomeni, a priest of the Diocese of Albany, N.Y., is Associate Professor of Liturgy and Homiletics, and Chair of the Department of Word and Worship at Catholic Theological Union in Chicago. He has written widely on liturgy, music, symbolism, the catechumenate, the Eucharist and liturgies with children, among other subjects. In addition to his teaching, preaching and other duties, Fr. Fragomeni serves as Spiritual Director for the Shrine of Our Lady of Pompeii, an Italian-American parish in Chicago’s Little Italy.

Changes include the removal of the penance aspect of the rite and the addition of the Gloria. A major change is the addition of a section that allows, with the approval of the Bishop, that a non-ordained individual could witness a wedding. Although this was done for areas where access to an ordained minister is limited, this was a similar point that was used to allow for the implementation of a Parish Life Director.

One pastoral item that was requested by the USCCB that was declined was the usage of a “Married” Litany of the Saints to pray for the couple. It was mentioned that this could be added as a song, maybe during the Offertory.

Since we are in a transition of the wedding rite, it will be interesting what we will utilize for practicum in diaconate formation, year 5.

Engaging New Parents Through Baptism and Beyond
Many families drift away from church during the stressful early childhood years. At parishes, we may struggle with the question of what we can offer them. We wonder how to communicate God’s Boundless Mercy to them. This is when we need to help parents step into their role as the primary cultivators of faith for their children. But we need to start with where they are. This workshop will explore how can we use the baptism preparation process to evangelize and support new parents, how we can continue to keep young families engaged, and what resources are available to support leaders in this ministry.

Paul Canavese with his wife, Ann, are co-Directors of The Pastoral Center and the Web site GrowingUpCatholic.com. Based in Alameda, Calif., their family operates a mini-urban farm. Paul focuses his ministry on coaching parents, daily life discipleship and evangelization, and helping parishes implement Pope Francis’ vision. He is a presenter for The Pastoral Center at parish, deanery and diocesan events.

The suggestion made by Paul is that prior to the actual Baptism, there should be a period of RCIA similar preparation for the parents, depending on their faith background and how active they are in the church. There is a need to develop a relationship with the parents of the child at the onset and then we need to maintain that relationship.

One of the other items that he suggested, similar to RCIA is that there should be a couple that sponsors the parents of the child who is going to be baptized.

A sponsor or mentor has been suggested a number of times for various aspects of faith formation. This could include everything from joining the parish, through the sacraments, and even journeying with a family through hospice.

The Spiritual Bridge: Moses to Jesus
Jews and Christians tend to see a disconnect between Moses and Jesus – one a man of law, the other of faith. In this workshop, we will explore the deep spiritual connections between these two men of God. Our focus will be on how they both brought their people to faith in and obedience to God.

Based in Southern California, Rabbi Michael Mayersohn is a Reform Rabbi who teaches the Bible, both Hebrew and New Testament, offering Jewish insights into Sacred Scriptures. Since 2003, he has spoken at over 20 churches in Orange County and San Diego in California and in Arizona, teaching Christians the Jewish roots of Christianity and context of the life and ministry of Jesus. Rabbi Mayersohn has been a presenter at the Religious Education Congress since 2010 and is author of “Are We Sinners?”

The presentation covered how Vatican II, specifically “Nostra Aetate” removed the death of Jesus as being the responsibility of the Jewish People and “Dabru Emet” a document sign by over 200 Rabbis, including the presenter, about those things that the two communities have in common.

Rabbi Michael commented about how during his lifetime being called a “Christ Killer” was common. However, this phrase has never been uttered at any of his children.

One portion of the Hebrew Bible, that Rabbi Michael pointed to as a key Jewish passage, is the same one that Jesus quotes in this Friday’s Gospel reading. A reading that Jay will be giving a reflection on. He will be able to utilize many of the points made during this session during as part of his reflection.

Mike Patin
“Faith Horticulturist” Mike Patin lives in Lafayette, La., and has worked in ministry since 1984 as a high school teacher, coach and diocesan youth minister for the New Orleans Archdiocese. He has spoken to groups ranging from 10 to 23,000 in over 130 dioceses in the United States and Canada on issues of Catholic faith, positive attitude, using our gifts and living life fully. Patin has published two books: “A Standing Invitation” and “This Was Not in the Brochures: Lessons from Work, Life and Ministry.

While Candy has heard Mike speak many times, his humor and the way he takes on life is so inspiring.  He spoke directly of the Mercy that comes from the Holy Father.  The year of Mercy is an excellent opportunity to take the principals of Mercy and add these elements to our everyday life:

Be Present~ We must go out of our way to be present in the world.  With all we encounter, with acts of mercy towards those whom will never know the works we do.  To listen to those who mourn, are in pain, the sick, the incarcerated, those who struggle with everyday life.  We are called to witness and evangelize and to do this we must be present.

Hospitality~ We must welcome all into our services, to see that all feel welcome from the stranger to those we see each day.  We must find those who have wandered away from the Church and welcome them back.  We must reach out to those who do not practice or have turned into another faith to find enrichment.  Not to bring them back to the Church, to assure them that we want this fellowship and their faith as it makes our life richer.

Dead Man Walking: The Journey Continues …
Sr. Helen Prejean is a storyteller from the South. During this session, she will relate how she became involved with the Ministry Against the Death Penalty and stories about the many special people she has met along the way. Having witnessed and accompanied six men to their execution, she is passionate about the mission of abolishing the death penalty. She sees no dignity or justice in this punishment.

Sr. Helen Prejean, a member of the Congregation of St. Joseph, is author of “Dead Man Walking.” The human rights activist speaker has been instrumental in sparking national dialogue on the death penalty and helping shape the Catholic Church’s newly vigorous opposition to state executions. Based in New Orleans, Sr. Prejean travels the world speaking about her ministry. She is presently at work on another book, “River of Fire: My Spiritual Journey.”

William Shakespeare wrote: “Open thy gates of mercy, gracious God! My soul flies through these wounds to seek out thee.”

In the midst of our limitations and shortcomings we encounter a God who is infinite. Our theme for the Religious Education Congress 2016 – “Boundless Mercy” – takes its inspiration from the Gospel story of Jesus meeting the woman at the well and from the Jubilee Year of Mercy convoked by Pope Francis.

In his letter Misericordiae Vultus, Pope Francis writes, “Mercy will always be greater than any sin, and no one can place limits on the love of God who is ever ready to forgive.” We see this mercy and love in Jesus as he speaks to the Samaritan woman and promises to give her “living water.” I invite you all to join us at the Religious Education Congress in Anaheim,

Sister Helen is passionate about the death penalties, having walked with 5 individuals who have been executed.  Her stories are both enlightening and heartbreaking.  She spoke of the books she has written as well as the criminal cases she has assisted with.  Her passion is most notable when she speaks about the waste of resources when it comes to incarcerated who can wait on death row, waiting for appeals and trials, time which spent in a cell.  She also spoke passionately about the petition which would eliminate the death penalty in California.  The stories were enlightening and filled with compassion, the process which she has helped with to find the truth of case and doing her best to see that justice is realized.

If you have any questions about what we have experienced in the diaconate (aka “that deacon thing”), please ask us or send us an e-mail to gbmom_01_02@yahoo.com.

If you would like to attend a Diaconate Information day, please attend one of the following:

If you are interested in becoming a Deacon or a Deacon Couple for the Archdiocese of Los Angeles, please contact: