You are here: Home / Blog / Today is the Feast Day of Mother Cabrini 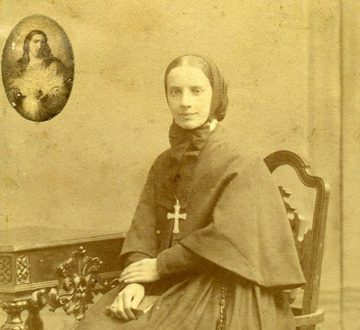 Frances Xavier Cabrini was the first United States citizen to be canonized; she became a U.S. citizen in 1909. Her deep trust in the loving care of her God gave her the strength to be a valiant woman doing the work of Christ.

Refused admission to the religious order which had educated her to be a teacher, she began charitable work at the House of Providence Orphanage in Cadogno, Italy. In September 1877 she made her vows there and took the religious habit.

When the bishop closed the orphanage in 1880, he named Frances prioress of the Missionary Sisters of the Sacred Heart. Seven young women from the orphanage joined her.

Since her early childhood in Italy, Frances had wanted to be a missionary in China but, at the urging of Pope Leo XIII, Frances went west instead of east. She traveled with six sisters to New York City to work with the thousands of Italian immigrants living there.

She found disappointment and difficulties with every step. When she arrived in New York City, the house intended to be her first orphanage in the United States was not available. The archbishop advised her to return to Italy. But Frances, truly a valiant woman, departed from the archbishop’s residence all the more determined to establish that orphanage. And she did.

In 35 years Frances Xavier Cabrini founded 67 institutions dedicated to caring for the poor, the abandoned, the uneducated and the sick. Seeing great need among Italian immigrants who were losing their faith, she organized schools and adult education classes.

As a child, she was always frightened of water, unable to overcome her fear of drowning. Yet, despite this fear, she traveled across the Atlantic Ocean more than 30 times. She died of malaria in her own Columbus Hospital in Chicago.