You are here: Home / Blog / What Our Lady Of Guadalupe Means To Me 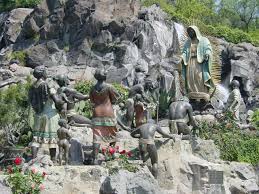 Holy Family students Michael, James and Madeline Jaburian and Emma Mendoza-Munoz have a very unique connection to Our Lady of Guadalupe.  Their late great-grandfather, grandfather of Lucy Jaburian and Gloria Mendoza, was noted artist and architect, Aurelio G.D. Mendoza.  Mr. Mendoza’s work has been in Mexico City’s Palace of Fine Arts and in several historic theaters including the Metropolitan Theater in Mexico City.  His last and most notable work was the monument “La Ofrenda” at the Basilica of Our Lady of Guadalupe in Mexico City.  He was commissioned, at the age of 80, to design and direct the construction of a monument to Our Lady at the foot of the hillside where She first appeared to Juan Diego.  The project includes 17 bronze statues celebrating the indigenous people’s adoration of Our Lady of Guadalupe.  The monument took four years to construct with Mr. Mendoza presiding over all aspects — engineering, masonry, quarry, landscape, water fall design – he even modeled for statues he designed so they could be molded to his artistic vision.  “La Ofrenda” (The Offering) was opened to the public in September 1986 and has been admired by millions including Pope John Paul II on his historic visit to Mexico. The shrine of Our Lady of Guadalupe is the most visited Marian shrine in the world.  A video of the construction of “La Ofrenda” can be viewed at https://www.youtube.com/watch?v=2_EdgyjIcAA   Mr. Mendoza was a parishioner of Holy Family for many years and was laid to rest in the mausoleum under the Basilica where La Virgencita’s tilma is displayed.   – Lucy Jaburian