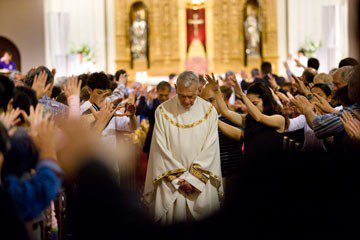 “Ordination” comes from the Latin word ordinatio, which means to incorporate someone into an order. The word order in the Roman empire meant to describe an established civil body, especially a “governing body”.  So the Church adapted this understanding to their “governing” leadership.  There were many Orders in the early Church: the order of catechumens, virgins, widows. We are also familiar with the term “Religious Orders” referring to organized groups in the church with specific gifts or talents.   In the Sacrament of Holy Orders, a man is incorporated into the priesthood of Christ.  There are three orders: the episcopate, the priesthood, or the diaconate. The Catechism also suggests that the Episcopal ordination is the fullness of the sacrament of Holy Orders. And this is rooted in the documents of Vatican II.

The Priesthood of Christ:
The priesthood was established by God among the Israelites during their exodus from Egypt. God chose the tribe of Levi as priests for the nation. Their primary duties were the offering of sacrifice and prayer for the people.
Christ, in offering Himself up for the sins of all mankind, fulfilled the duties of the Old Testament priesthood once and for all. But just as the Eucharist makes that sacrifice present to us today, so the New Testament priesthood is a sharing in the eternal priesthood of Christ. All baptized individuals are called to be “priests, prophets, and servant leaders” at their baptism.
While the common priesthood of the faithful is exercised by the unfolding of baptismal grace – a life of faith, hope and charity, a life according to the Spirit, the ministerial priesthood is at the service of the common priesthood.  While all believers are, in some sense, priests, some are set aside to serve the Church as Christ Himself did. The ministerial priesthood is a means by which Christ unceasingly builds up and leads the Church. (CCC 1547)
Those who are elected into the Holy Orders sanctify, teach, and govern in the name of the whole Church, the Body of Christ.  The ministerial priesthood has the task of representing Christ and therefore he can represent the Chruch

The Ordination of Bishops:
There is only one Sacrament of Holy Orders, but there are degrees of this sacrament. The first is that which Christ Himself bestowed upon His Apostles: the episcopate. A bishop is a man who is ordained to the episcopate by another bishop (in practice, by several bishops). He stands in a direct, unbroken line from the Apostles, a condition known as “apostolic succession.”
Ordination as a bishop confers the grace to sanctify others, as well as the authority to teach the faithful and to bind their consciences.

The Ordination of Priests:
The second degree of the Sacrament of Holy Orders is the priesthood. No bishop can minister to all of the faithful in his diocese, so priests act, in the words of the Catechism of the Catholic Church, as “co-workers of the bishops.” They exercise their powers lawfully only in communion with their bishop, and so they promise obedience to their bishop at the time of their ordination.
The chief duties of the priesthood are the preaching of the Gospel and the offering of the Eucharist.

The Ordination of Deacons:
The third level of the Sacrament of Holy Orders is the diaconate. Deacons assist priests and bishops, but beyond the preaching of the Gospel, they are granted no special charism or spiritual gift.
In the Eastern Churches, both Catholic and Orthodox, the permanent diaconate has been a constant feature. In the West, the office of deacon was reserved to men who intended to be ordained to the priesthood. The permanent diaconate was restored in the West by the Second Vatican Council. Married men are allowed to become permanent deacons.

Eligibility for the Sacrament:
The Sacrament of Holy Orders can be validly conferred only ona fully initiated man(one who has been baptized, confirmed, and received their First Eucharist. A man cannot demand ordination; the Church has the authority to determine eligibility for the sacrament.
While the episcopate is reserved to unmarried men, the discipline regarding the priesthood varies in East and West. The Eastern Churches allow married men to be ordained priests, while the Western Church insists on celibacy. Once a man has received the Sacrament of Holy Orders, however, he cannot marry.

The Form of the Sacrament:
As the Catechism of the Catholic Church notes:
The essential rite of the sacrament of Holy Orders for all three degrees consists in the bishop’s imposition of hands on the head of the ordinand and in the bishop’s specific consecratory prayer asking God for the outpouring of the Holy Spirit and his gifts proper to the ministry to which the candidate is being ordained.
Other elements of the sacrament, such as holding it in the cathedral (the bishop’s own church); holding it during Mass; and celebrating it on a Sunday are traditional but not essential.

The Minister of the Sacrament:
Because of his role as a successor to the Apostles, who were themselves successors to Christ, the bishop is the proper minister of the sacrament. The grace of sanctifying others that he receives at his own ordination allows him to ordain others.

The Effects of the Sacrament:
The Sacrament of Holy Orders, like the Sacrament of Baptism and the Sacrament of Confirmation, can only be received once for each level of ordination. Once a man has been ordained, he is spiritually changed, which is the origin of the saying, “Once a priest, always a priest.” He can be dispensed of his obligations as a priest (or even forbidden to act as a priest); but he remains a priest forever.