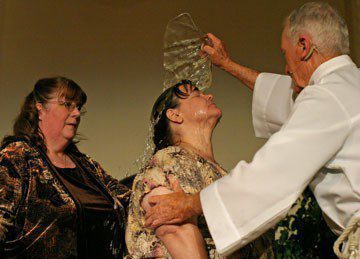 Baptism, Confirmation, and Eucharist
Every society that wants to continue must admit new members. This is true of sporting leagues, universities, the unions, the United States and churches. In some societies, very little may be required to gain admittance: When you wish to become a member of a book or record club, you just send in the coupon and the check. At another extreme, young men gained admission to adulthood in certain African cultures by elaborate rites, as the book and television drama Roots depicted. The seriousness surrounding the admission of new members, the length of time involved, the amount of discussion and work between the one asking admission and the group itself-these are some of the signs by which we can evaluate how vital and important the group is to its members.

Moreover, the customs that make up the initiation usually tell the candidate a great deal about the group and the group a great deal about the candidate. It is not unlike the time of engagement before marriage: If these two are to spend their lives together, it is worth the trouble of an initiation time. The Catholic rites that have developed and have been used over and over again for the initiation of new members are those that have been proven to work by experience. They let candidate and church make good decisions about one another.

The Catholic church has been rediscovering its rites for the Christian initiation of adults. The patterns in today’s rites are based on those that were developed in the early centuries of the church when many adults sought admission to the Christian communities. Today the Church fully expects the full and rich process of the Rite of Christian Initiation of Adults.  This is the way we initiate new members into our community of faith.

The Rite presumes a period of initiation lasting at least a year, and perhaps longer. In the first stage, the person hears the preaching of the gospel. This is a time of inquiry, not to be rushed. The second stage is called the catechumenate. It begins when the candidate formally enters the “order of the catechumens,” which, like the “order of the baptized,” is a way of belonging in the church. During this time, which may last several months or several years, formation is brought about through contact with the church community and especially with catechists. Catechumens may participate in the liturgy of the word, and the community’s keeping of the Christian year is the great teacher of its ways of living and of believing. When both community and catechumen judge that the time is right, the “rite of election” takes place, meaning that the catechumens are now “the elect,” the chosen. This happens at the start of Lent. Lent serves as a period of purification and enlightenment and is marked by special rites of “scrutiny” at the Sunday Masses. The church prays that the candidates will be free of all evil. Then, after the Paschal fast of Good Friday and Holy Saturday, the elect profess their faith at the Easter Vigil, are baptized and confirmed, and share for the first time in the eucharist. During the 50 days of Eastertime, the newly baptized con¬tinue to come together so that the church may show them the fullness of its life.

In the liturgy, the church puts its life together; thus at liturgy the church expresses itself to the candidates-from their enrollment in the catechumenate until the end of their first Eastertime as Christians. In coming years, these rites will more and more embody ways for the local church to be aware of its catechumens, to be stirred by their presence. But liturgy has to express what is real in people’s lives. So the rites of initiation gather up what is really going on: the candidates learning of Christ from those who make up the church, and the church members themselves learning Christ anew from the candidates.

The initiation of adults is much more than just a sacramental ritual bath. If we reduce adult initiation to the rites at the font, we rob the new member of the much-needed love and support and Christian witness that only a flesh-and-blood community can give. The whole process of becoming a Christian, as outlined in the Rite of Christian Initiation of Adults, requires the community’s involvement in the candidates’ journey to baptism. The community passes on the living tradition of faith in ways that no one person or catechism could ever do. Behind all the rites and catechetical preparation, there is a strong sense of welcome. The community opens its arms and warmly receives new members and so integrates them into the community.

If you would like to begin this process at Holy Family, please contact Dawn Ponnet  dponnet@holyfamily.org or call 626.403.6128